An Introduction to Laughter Yoga, 2011 onwards 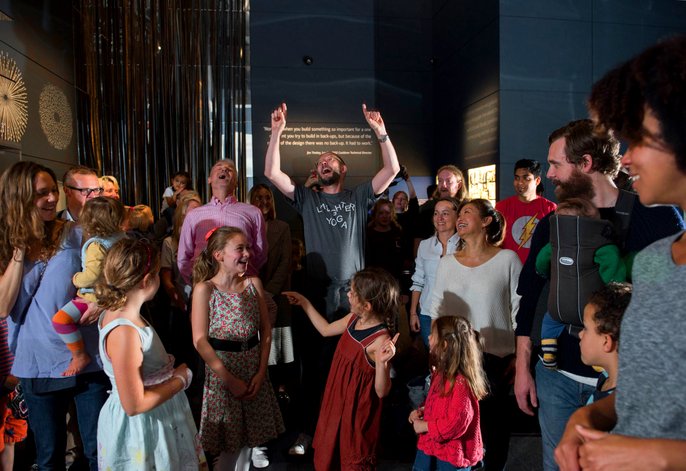 (Above: 'An Introduction to Laughter Yoga' in the Olympic Cauldron gallery, part of The Festival of Radical Play, The Museum of London 2017.)

For the past few years I have been repeatedly attempting to redeliver a session of Laughter Yoga that I once attended back in 2011. Using only my memories, some google research and sheer enthusiasm my aim is to take the gathered crowd from passive, attentive listening to arm waving, unself-concious hilarity in 15-20 minutes.

I disclose my lack of thorough training at the start, then lead the participants through a carefully calibrated sequence of exercises, moving from gentle breathing, to simple hand gestures, to 'Haha' sounds, then from unconvincing forced chuckles to collective giggles and finally rapturous, full volume belly laughs, indistinguishable from the real thing. A fake lesson in fake laughter. 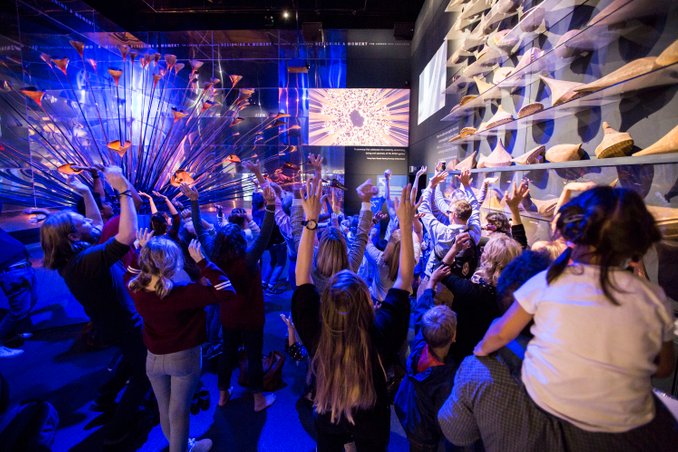 An Introduction to Laughter Yoga, 2017 - 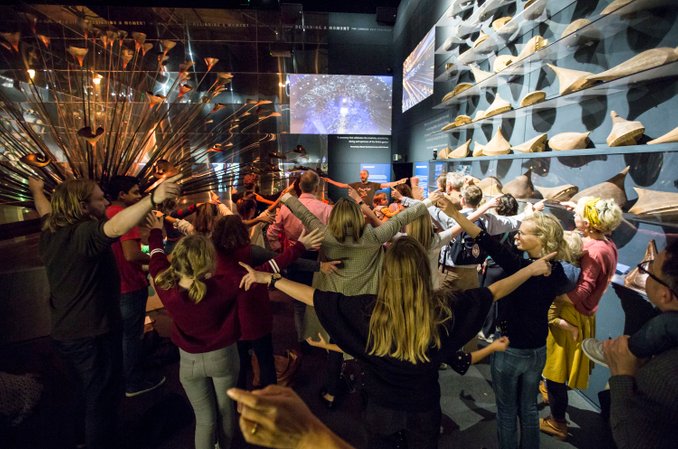 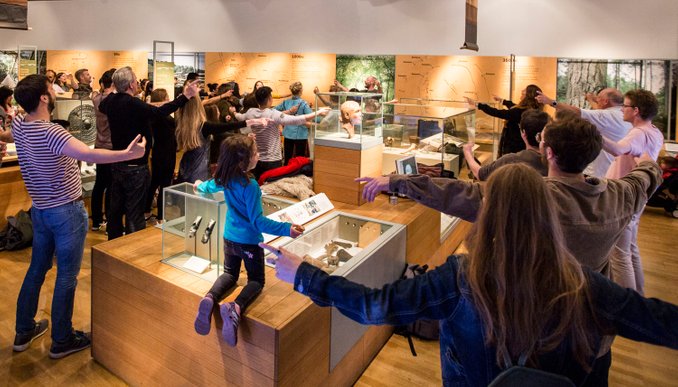 Above: 'An Introduction to Laughter Yoga' in the Olympic Cauldron gallery and Neolithic London gallery as part of The Festival of Radical Play, The Museum opf London 2017. 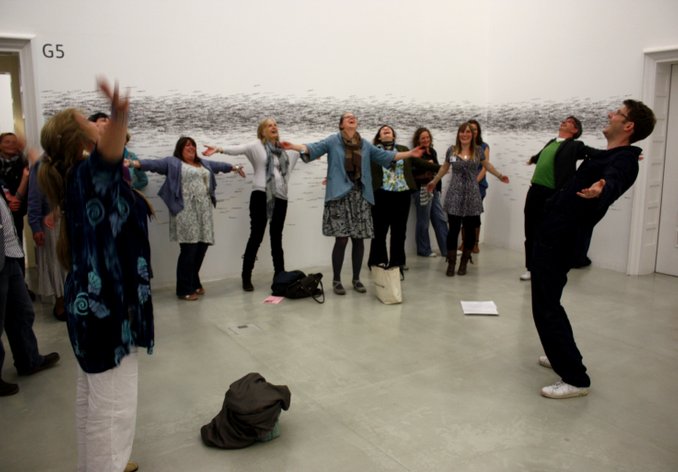 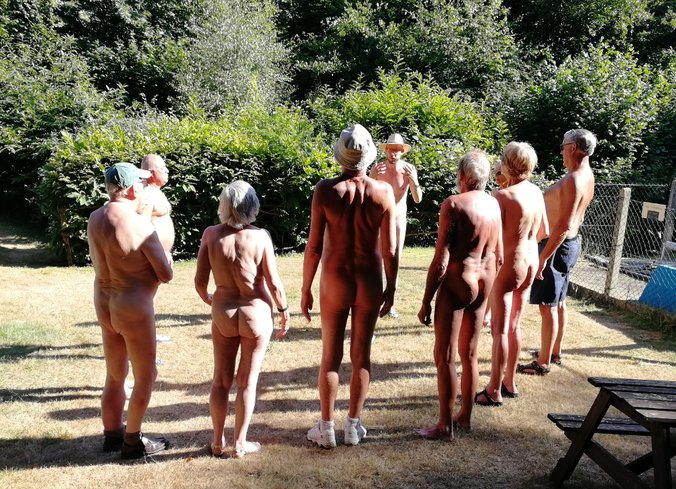 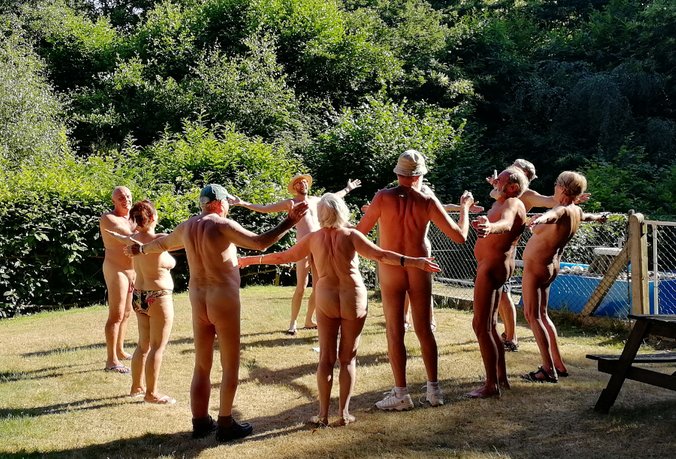 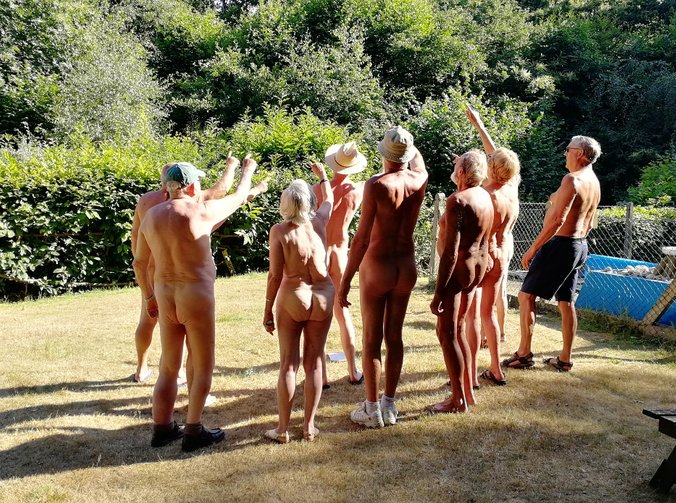 Below: 'An Introduction to Laughter Yoga' at Downright Excellent, a speech and language therapy charity for children with Down Syndrome.

Below: In 2019 I was selected to present new versions of AITLY for Art Night Open around Walthamstow, where I live and work. Art Night is an annual art event that commissions site specific artworks for locations around London. Artists this year included Cory Achangel, Oscar Murillo and Emma Talbot. 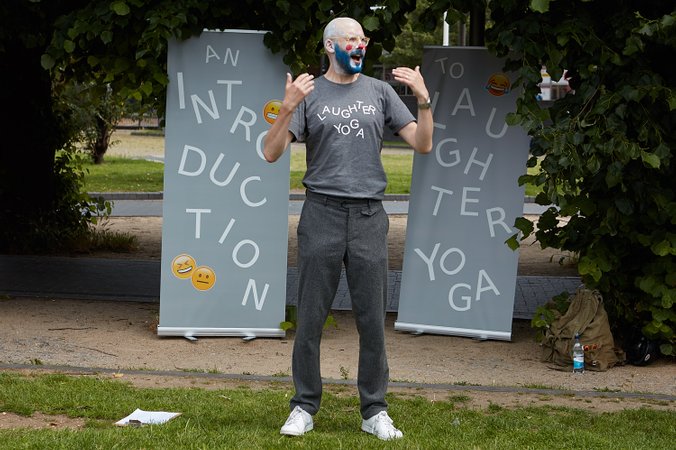 With Art Night's  support I was able to explore possible venues around the town and select some that would be particularly interesting for a group experiment in collective joy and pretend positivity.

The four chosen locations were: Walthamstow Town Square Gardens, a historic public space that is soon to be developed on (above); Bank Job, a community print workshop and anti-debt project in a disused bank branch; Greenleaf Baptist Church; and finishing in Waltham Forest Council Debating Chambers.

The sessions were held once in each location, on the hour every hour over four hours, moving North from the Town square to the Town Hall.

All photos of Art Night by Tom Carter. 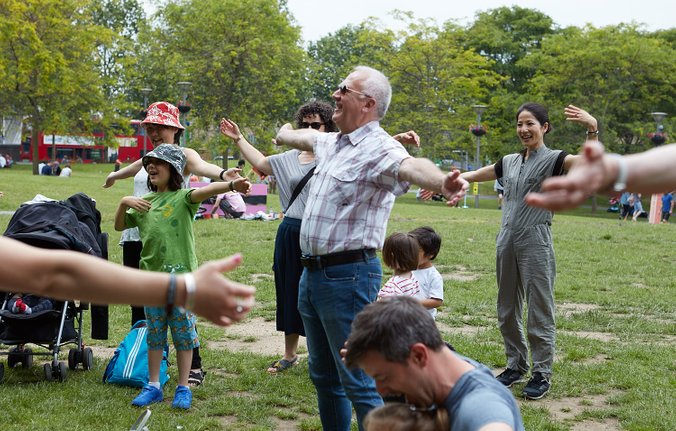 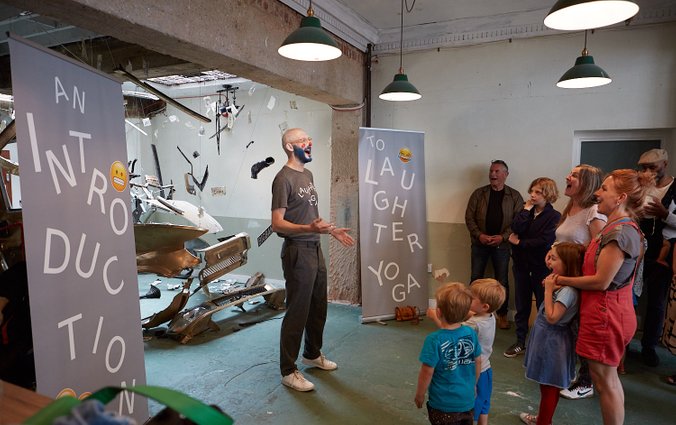 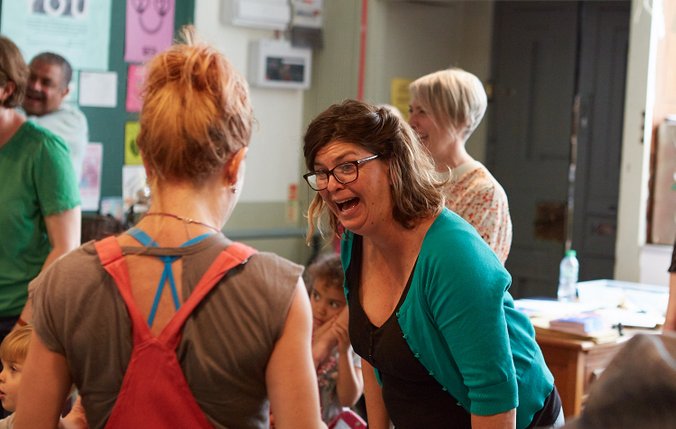 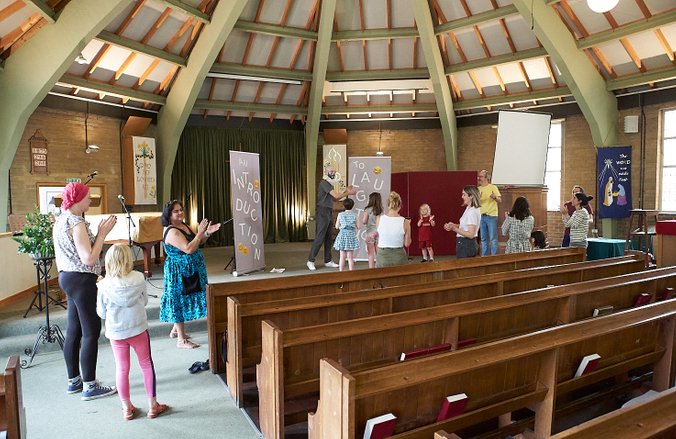 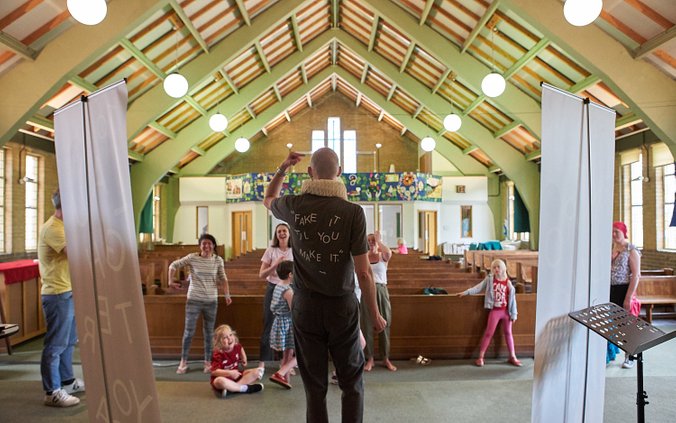 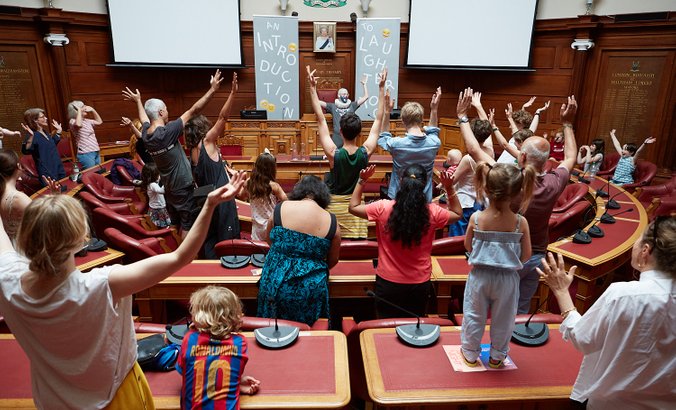 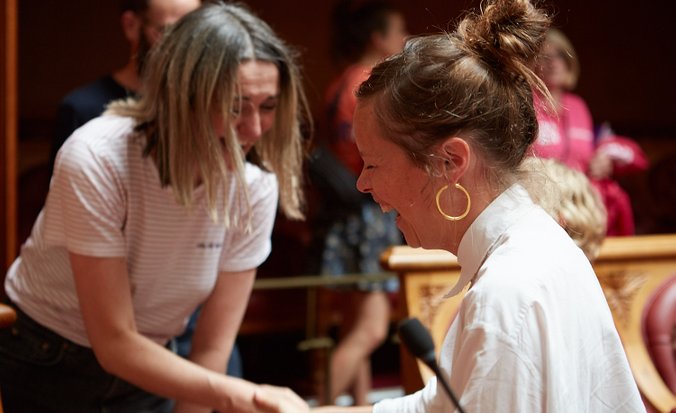 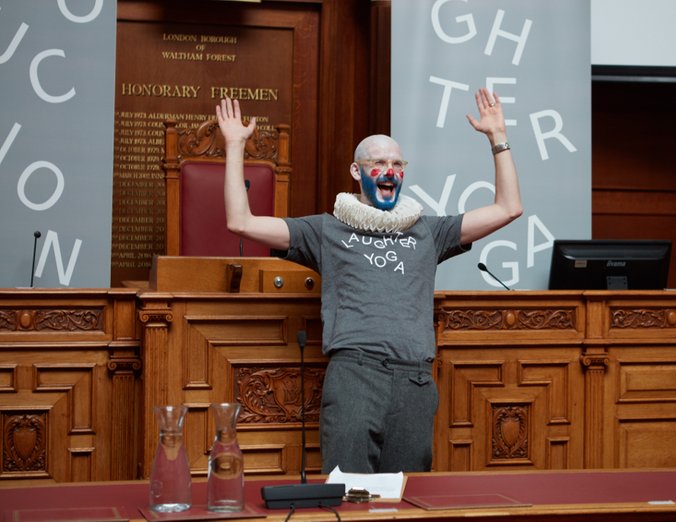 Most recently, during Covid-19, I have been delivering adapted versions from my studio, devised especially for the various virtual platforms. Online Laughter Yoga has been one of the surprise successes of this strange time, as the group effects of responding to each others' laughter is emphasised when each participant is joining from their own private space. The above event was hosted by The Holden Gallery as part of their 'Interruptions' series. 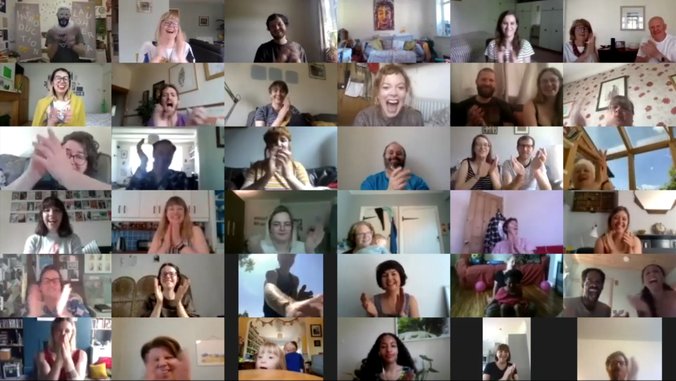 The same day I recorded a YouTube tutorial version (below) as part of Focal Point Gallery's 'Why Don't You...?' series of commissioned videos from artists they have worked with in the past. With no audience feedback, no laughter aside from my own, it was a more jarring experience, though beautifully edited and subtitled by Gabrielle Milanese.

Below: Over number of weeks in late 2020, in the midst of the second lockdown, I decided to transmit a live, improvised 20 minute session of Laughter Yoga exercises every Friday afternoon from my studio on Instagram Live. Each session would incorporate a different range of exercises, some traitional, some invented, an expensive ruff, a cheap clown nose, and a coloured wig deliberately worn the wrong way round.

Below: After coming across one of my Instagram Live sessions I was invited by a nurse at St Mary's Hospital London to run a session for her staff, all currently redeployed to Covid wards.

"I used the video a few days ago as I was feeling stressed and it really helped! Thanks again for that..."

"Had a brilliant time with friends trying out the Laughter Yoga! You've definitely lightened our lockdown."

"Loved Laughter Yoga! Online events can often feel passive, and watching a screen exhausting. But laughter yoga felt totally different - energising and hilariously ridiculous. Even though (I'm guessing) you don't get the same energy when it's in person, I still loved watching everyone's faces in the little squares onscreen!

"I have always wanted to try Barry's 'An Introduction to Laughter Yoga' but due to the long distance I've not been able to attend. Doing a virtual workshop over Zoom was a brilliant accessible way to engage with people from across the country, and to participate at a time where it is very easy to feel disconnected from people - during the lockdown. Barry's Laughter Yoga session was a moment of respite during a stressful time; it was entertaining, insightful and joyous."

Classes can last around 30 mins. Easily adaptable to any location. Suitable for all group sizes, ages and abilities.